On February 23, 1942 a letter from Ilion, New York was mailed to Private George Endres  at Camp Polk, Louisiana. George’s profession was teaching. However now he was trying to keep up with the whirlwinds of military life in war time. Almost 72 years later this letter along with 196 others were heaped in box to be auctioned off. This auction of letters was sandwiched  between auction lots of dishes, old knives, lamps,  mason jars, and other such household items.

Who were these people who’s deepest thoughts, fears and their great love for each other, was now on public display? A winning bid of forty dollars was to lead me on an exploration of some real heroes in their time. These letters would teach me once more the human cost of war and how strong the ties of love for country and family can be. 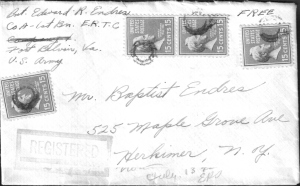 A letter home to Pa.

George’s younger brother Edward Endres was training at Fort Belvoir in Virginia. In a letter home to his father, Baptist Endres, Edward describes some of the training he is receiving.

Monday morning we get up at 3am and go out to the rifle range and shoot for record. This week was one of the toughest weeks yet. We worked 22 hours one day and 17 hours another. I don’t mind it for a change but I wouldn’t care for it as a steady diet. They are still chasing us around with tanks and now they even dive on us with airplanes. I wonder what the hell they will think of next.”

Edward was training to be an army engineer.  The brothers and their sister Helen, who was married and living in Troy N.Y,. were very close to their father. Anna, their mother, died in 1940 at only 59 years of age. Both mother and father were born in Germany. All the children were born in Herkimer, New York. A quick check on ancestory.com provided many records for Baptist. From his passenger list I learned he sailed to America from Hamburg, Germany on August 26, 1900. He was 17 years old when he crossed the ocean. He was married four years according to the 1910 census. Helen, their oldest child, was three years old and would have to wait  till 1915 for her brother George, to come along. Edward would be born in 1920. 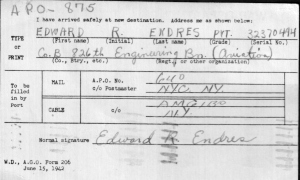 Address to send mail to.

On September 5, Edward wrote to George that he was now in England.

I arrived safely in England and everything is fine. The climate here is cloudy and very damp. Did you hear how Pa is getting along? You probably won’t hear much from me as it takes a long time for mail to get there. Your letters will get to me quicker by air mail. Have you heard from Helen lately? Things are going fine with me, so don’t worry about me. I suppose you will be shoving off soon. Is there anything new happening back home? Probably Bea will write to me as soon as she gets my new address. Take it easy and I hope you can stay where you are for a while yet. Good luck Eddie.”

Bea, whom he mentions in the letter, is the girl he hopes to marry after the war. As you can tell by the letter, Eddie is anxious for news from home and letters. The card pictured above is to let people know of his new address. The APO number is the post office that will get his mail. It is done this way, so his exact whereabouts is unknown. 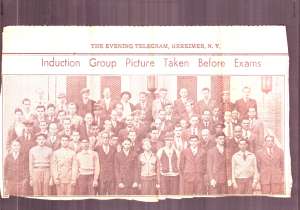 Pictures of friends and neighbors going to war.

Starting in October of 1942 I am introduced to Lola Keddell. I quickly learn that she and George are engaged to be married. Lola sends news clippings in her mail. Above is one such news clip. She points out the people they know. In a letter dated Sunday, October 11, 1942 she writes,

Hello hon. How is everything today? Hope you are well. This morning your aunt phoned me, and said your Uncle Lawrence wanted me to come up to dinner with Bea. It was simply delicious. She had potato balls, I never had them before, but were they ever good, roast pork, and brown gravy, salad, sweet pickles, coffee, and cinnamon buns, I think you call them. Everything was grand.”

She closes the letter in the following manner.

“Hon take care of yourself. You know I love you with all my heart. I wish you were here tonight and every night. It seems, I haven’t seen you in ages. It was two months yesterday I went down to see you. I was looking at your old letters when I came home this afternoon. I really enjoy doing that once in a while. Goodnight love. All of my love and kisses your Lola.”

She has 41 X’s to close out the letter. It is easy to read between the lines to hear the sorrow of separation and the underlining of fear. In December,  I noticed she no longer uses her Maiden name of Keddell. She now is Mrs. George Endres. George was able to come home to Herkimer, and they got married in the family church, St. Francis De Sales, in Herkimer, New York. In a letter to George dated December 5, 1942, Lola in part writes the following.

Honey I am getting so anxious to see you once again. Golly, Its swell. This time, I am going down to see my husband. Hon, I love you more and more every day.

As for me getting thin i think I’m getting fat, at least, I haven’t lost any weight. Honest, “Doc” do you want to examine me? I really will let you now….

I will have to let you know when I see you Wednesday night how long I can remain with you. Hon really it doesn’t seem possible I’m leaving Monday night. I am so happy I can be with you. Our Lord, is so good to us I know He always be too, if we have faith in him. Darling I will say goodnight for now I will write you a letter tomorrow. Your loving wife Lola.”

George was named “Doc” as he was training to be a medic. He was also called “Prof” as he was a school teacher before the war. I will be posting Mail Call 1943 in a few days. We will see how the family is doing as the war heats up.