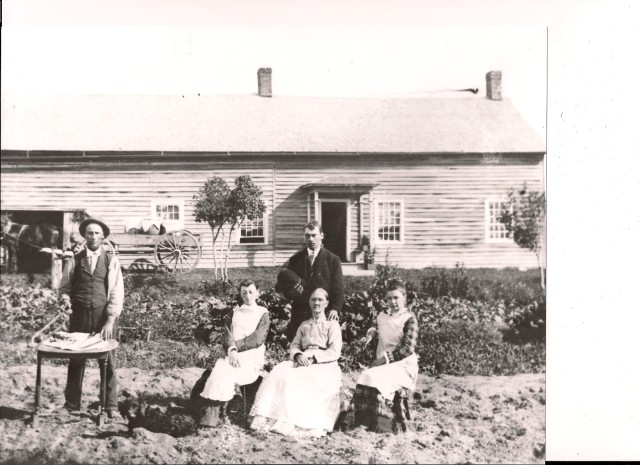 Here is another example of what I call a front porch picture. Pictured is the Edward L Monty family of Beekmantown New York. The picture is taken on their farm. A quick look at the picture shows a family dressed in their finest clothes in a proud pose. Edward Lafayette Monty (1818 – 1904) my wife’s 2nd Great Grandfather is shown standing at a table with a saw in his hand. A horse and wagon are in the background. Flowers in the flower boxes can be seen on the front porch. One of the windows is slightly open to let in fresh air. Ida Bell Monty (1861 – 1879) is next. Since Ida died in 1879, I believe the picture was taken on or before 1879. Joyce (Jicey) Murphy Monty (1817 – 1904) is seated next; she is my wife’s 2nd Great Grandmother. Seated on the end is Etta Monty Smith (1857 – 1942). Standing with his hand on his mother’s shoulder is Oreon Monty (1850 – 1930) who is my wife’s great-grandfather.

Edward was a farmer in the Chazy and Beekmantown area. He married Joyce or Jicey Murphy of Cohoes New York in 1846. The family story is that Joyce made her trip to Beekmantown from Cohoes on horseback with her trunk strapped on. This was no easy journey of over 150 miles over a large sparsely unsettled part of the state. Pictured below is the trunk that Joyce packed her belongings in. They were to be married well over fifty years until death took them just months apart in 1904.

Great Grandfather Oreon Monty worked in a sawmill and was also a farmer. He was to work his farm until his death in 1930. Oreon did not marry until he was 41 years old. His bride Emma Craft was fifteen years younger. They formed a marriage that was to last 39 years ending with Oreon’s death. Emma was to live for eight more years. Below is their wedding announcement.

From the Plattsburgh Sentinel; November 6, 1891.

While we may not have pictures of all our great-grandparents, we may have family stories or information that we have found because of our research efforts. It is up to us to tell their story because if we don’t, we can be sure that all or most will be lost within one or two generations. We can make it as simple or complex as we like. I hope the above helps some of you to get started on your family history project. The way I see it is you could have a one-page story about an ancestor or a blank page. Which one do you want to pass down to future generations?

35 Responses to Telling Their Story