Letters are Windows to the Past

My Great Grandmother Bessie Barney Bonnett LeClair was trying to make a new start in 1918. She had divorced her first husband Abner Bonnett and had just married William LeClair. The envelope shown below housed a letter from her husband Abner pleading for one more chance as he promised to “change his Ways.” They did get back together long enough to have one more child, their sixth before they finally divorced in 1914.

Envelope for letter from Abner to his wife Bessie. Note the simple address used.

In the partially illustrated letter below written October 6, 1918, Bessie seems happy with her new marriage and baby son. In the letter written to her oldest daughter Florence Bonnett Tromblee, who also had a young baby Bessie says in part,

I have just laid baby down, he has been napping _ _ _ _ aches. He is getting fat he will be seven weeks old Wed. I got your letter and was oh so glad to hear you were all well.

Bessie also in this letter talks about fixing up their new place with wallpaper and painting the ceilings. She also varnished the icebox and a writing desk. I would guess this letter was written on that newly varnished desk. However, a happy life was to elude Bessie as just fifteen days after writing this letter she was to become a casualty of the Influenza epidemic of 1918 at the young age of 36. This may be the last letter Bessie ever wrote; it is certainly one of the last. This letter was one of a collection of letters I received from Julia Tromblee, the daughter-in-law of the letter’s recipient Florence Tromblee. Julia and I never knew of each other and met when we noticed each others family trees on ancestry.com

The letter shown above was not written by a relative but was written about a relative. The letter is dated 1825 and concerns Samuel Dakin, a cousin of mine. Samuel and his partner William J Bacon purchased the newspapers the “Utica Sentinel” and the “Columbian Gazette” and combined them into one newspaper. In part the letter says;

“… We feel confident that the paper under their direction will be ably & successfully conducted. The public are deeply interested that the respectability of their public journal should be sustained, and we feel gratified at the prospect, that the varied talents of the editors of the present paper will give to it a character which will entitle it to the most liberal encouragement, and in that belief, we earnestly write to it the patronage support of your friends.”

The letter was signed by many of the leading citizens of Utica, New York at the time. The signatures continue onto another sheet of paper. Many buildings and streets are today named after some of the people who put their names to this letter of endorsement. I was able to get copies of this letter and many others from the Dakin family from the archives at Hamilton College where many from that branch of the family attended. 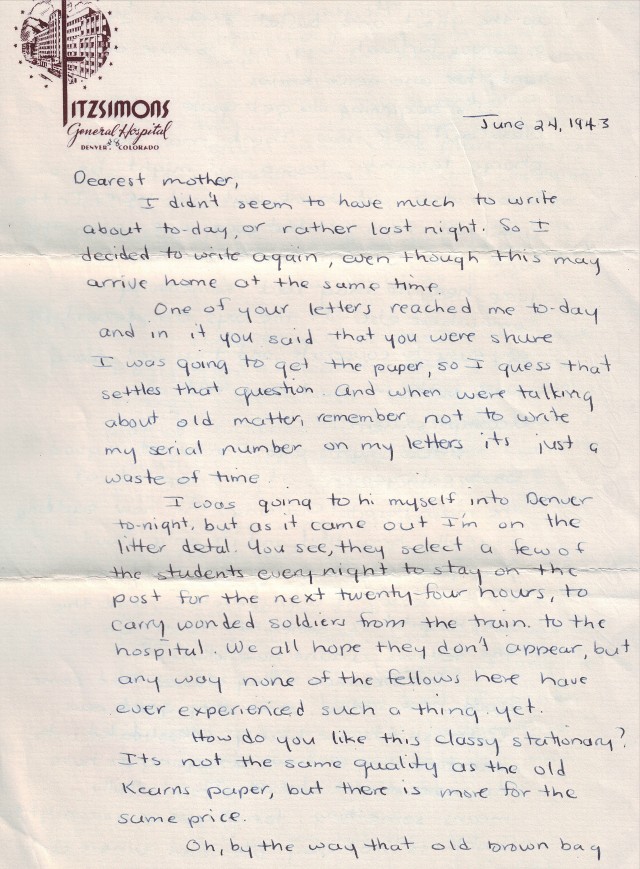 The partial letter above is from an extensive collection of letters written mostly by my wife’s father Robert Lyon to his mother during his military service in World War Two. At the time this letter was written he was still stationed stateside. In part the letter says;

“I was going to hi myself to Denver to-night, but as it came out I’m on the litter detail. You see they select a few of the students every night to stay on the post for the next twenty-four hours, to carry wounded soldiers from the train to the hospital. We all hope they don’t appear, but anyway none of the fellows here have ever experienced such a thing yet.”

Robert was to experience such a thing when he found himself in combat in Italy. His letters give great insight as to what he was going through and of his thoughts at the time.

You do not need letters to give you a peep into the past. I have old school report cards, driver licenses, pay stubs, postcards, certificates of achievements, greeting cards, and many other types of written records. Shown below is a birthday card and envelope from my wife’s grandmother to her great-grandmother. Many of these greeting cards have a short message and for many perhaps the only signature they will have of a relative. Besides looking at these old cards is fun. 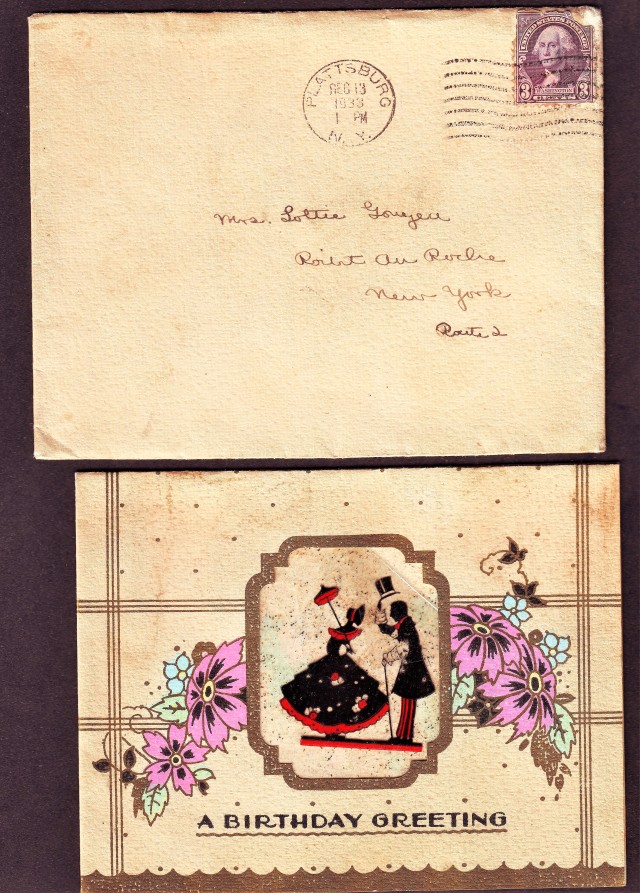 Birthday card from Ruby Gonya Monty to her mother Lottie.

The next letter illustrated below is part of a four-page letter. This copy of the letter was sent to me by a person that I met due to a DNA match. The letter was written by Page Cole and concerned the family of his wife, Mary Bushey Cole. Mary’s mother Mary Deloria Vincent Bushey Lajoy was my great aunt the sister of my grandfather Willis Deloria. As you can see from Mary’s many different last names she was married many times. Page was writing to a great-granddaughter of Mary who was trying to make sense of the family relationships. In the letter Page is assuring the great-granddaughter that all of Mary’s children were from her first marriage. The letter reads in part;

“Now Mary was the youngest. Mary was born on the 27th of April and was baptized in St. Peters Church in Plattsburgh on the 19th of May 1900. We have the original certificate of baptism, so the three children had to have the same father.” 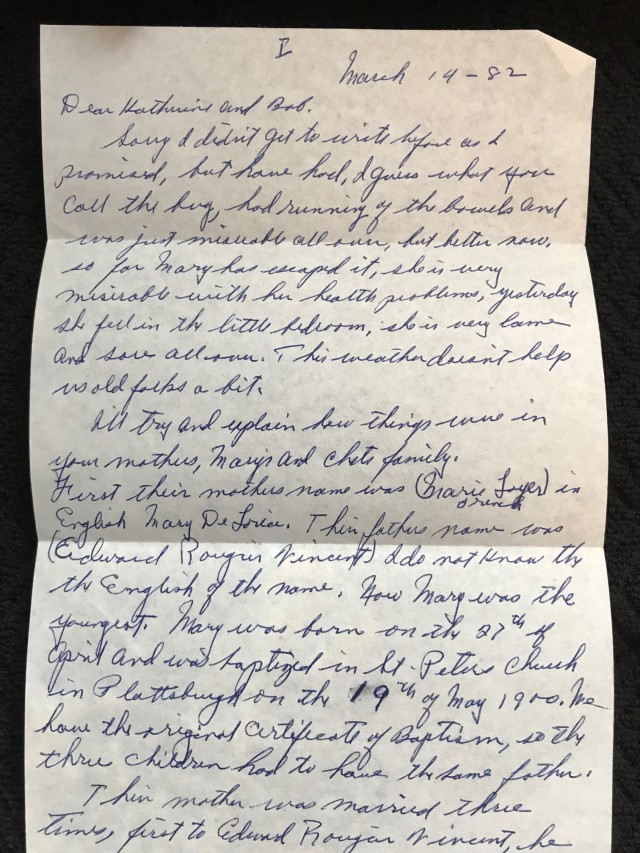 From this letter, I learned about Mary Deloria’s first husband, Edward Vincent. I had never heard of him until I read this letter. This was a four-page letter that was full of family history that I knew nothing about. I learned about name changes (not just from marriages) dates of death, and births also ages being lied about and why.

These letters have allowed me to understand better and tell the story of my family. With the exception of the birthday card which came from my wife’s parents papers all the letters shown were from other people and places. Even the collection of war letters from my wife’s father were from other people freely sharing and giving what they had. My wife had no idea that these letters existed until her cousin handed her a large archive box containing these letters. We all must search for and reach out to family and share what we have. By doing this, we will build a better family history.

For Better or for Worse comic strip. Used with permission.
https://www.fborfw.com/

How frail and ephemeral is the material substance of letters, which makes their very survival so hazardous. Print has a permanence of its own, though it may not be much worth preserving, but a letter! Conveyed by uncertain transportation, over which the sender has no control; committed to a single individual who may be careless or inappreciative; left to the mercy of future generations, of families maybe anxious to suppress the past, of the accidents of removals and house-cleanings, or of mere ignorance. How often it has been by the veriest chance that they have survived at all.

39 Responses to Letters are Windows to the Past