This well worn picture was taken about 1968.

When we go through an old box or album of pictures they can give us reason to laugh or sigh, and even feel a little sad. We get the most out of these pictures when they are of us or were taken by us. We know the background and story that the picture represents. The picture helps to capture the moment so we can recall the events that were taking place all around while the photograph was taken. A picture may be worth a thousand words, but sometimes we have to tell its story.

The above picture was taken at a Valentine semi-formal dance at my girlfriend Sandy’s (now my long time wife) high school in Beekmantown, New York. It was what we called a semi-formal dance. I know it was a semi-formal because I am wearing a coat and tie and Sandy is wearing a dress. The area high schools held many dances throughout the year. It was not uncommon that if two schools had an athletic contest, the school that was not hosting the athletic event would host a dance. Students and athletes from both schools would attend the dance. The cost to get into the dance was nominal, and the music was always a live band. Most of the bands were high school students who had gotten together and formed a group. We also had bands from students from the local colleges and from people who did it part time from their regular jobs. Below is news clipping from a 1967 Plattsburgh Press-Republican news article, about a newly formed band.

News article about just one of the many area bands.

It was at a school dance Where I met my wife. We did not go to the same high school as she went to Beekmantown High School and I went to Plattsburgh High School. We were to meet at a dance at a third school called Mount Assumption Institute (MAI). The night we meet I had no intention of going to the dance. I was at home watching television when a good friend came knocking on my door. He had a major crush on a girl at school and he wanted to go to the dance being held at MAI to try and meet up with her. I will admit it took some effort to talk me into going, as the last thing I wanted to do was go out that night. We walked to the dance where he went off to find the girl of his dreams (he had no luck) and I was thinking I would just go home. That’s when a girl who had her school locker next to mine came up and said she had someone she wanted me to meet. That’s when she introduced me to her cousin Sandy. She was cute with freckles and red hair and while I did not know it then I had found my dance partner.

Below is MAI the school where I met my wife. The school closed down a few years ago but has been remodeled into apartments. Funny I can still hear the music. 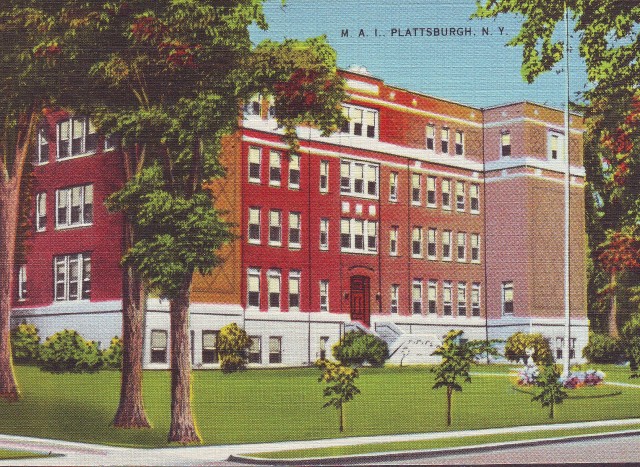 This was where my wife and I had our first dance.

Could I Have This Dance

When I held you close to me

As we moved together, I knew forever

You’re all I’ll ever need

Could I have this dance for the rest of my life?

Would you be my partner every night?

When we’re together it feels so right

Could I have this dance for the rest of my life?

Like Loading...
This entry was posted in Whats in a Picture? and tagged Beekmantown, Family history, genealogy, Plattsburgh, School dance, Valentines Day. Bookmark the permalink.

33 Responses to The Dance