The gift that helped to end a 55 year mystery.

The question I should have asked Bill about the DNA test kit he gave his wife Kelly for Christmas last year was, what did he think would happen? What did happen was an incredible life-changing event for Kelly and a family mystery that looked to be unsolvable finally revealed. Kelly was born in 1962 and immediately given up for adoption. She was to search for her biological family without any success until this year.

I now have to back this story up about fifteen years and give a little background. I have been researching my father’s family which had been scattered due to some unfortunate circumstances when he was very young. Two of his siblings were adopted into different families, one sent to the county home, and the four remaining including my father tried to make it on their own. Of the four remaining the oldest was 19 and the youngest age nine. I had finally found some of the children of the brother who was sent to the county home. It was with his daughter Susan my first cousin that family ties were reestablished and much information learned. Susan was to tell me a story about an incident that occurred when she was about fourteen years of age. At that time her family was working very hard to establish a farm in Potter County, Pennsylvania near the town of Shinglehouse. A woman with a young pregnant daughter came to visit. The woman turned out to be Susan’s father’s sister who she had never met. In fact, the sister was one of the siblings that had been adopted and had moved with her new family out of Pennsylvania several states away. In fact, it would be several years after hearing this story that I would finally learn what happened to her after the adoption. The young woman was left in the care of Susan’s family until she had the baby. After the birth of the baby, the mother came back at once and took her daughter home. Susan who thought that her family was going to keep and raise the baby never saw her aunt or her cousin again. She had no idea what had happened to the baby.

In March of this year, I received an email from Kelly asking for information as we have a close match in our DNA. We soon started talking over the phone. This was when I found out Kelly was adopted and was trying to find her biological family. I found out she was living in Potter County where she was born. She had been told that her mother had come from out of state for her birth. This was all Kelly knew about her birth and mother. Of course, Susan’s story came to mind, but I was in a quandary about what to do. Since hearing the story from Susan, I had tracked down the woman who could well have been the young pregnant woman in this story. We had exchanged letters and several phone calls regarding family history, and she was to give much information that filled many missing pieces of the family story. The baby being born in Potter County was never mentioned. Also while a long shot a couple of other possibilities could have been a viable explanation. I did give Kelly the name of a person who I have worked with on the Moore family history for years that had all the information I had. Then I thought and stewed about Kelly and her search for a couple of months until I could not stand it any longer. I contacted her again fully prepared to tell her where she should look. However, she had most of the answers already. She had reached the person I had recommended and with detective skills that would rival Sherlock Holmes she had put together most of the pieces. All I had to do was to fill in the Moore family history for her and introduce her to Susan. However, before I could introduce them, she found Susan herself. I told you she was good. Kelly informed me that Pennsylvania was releasing the birth certificates of adopted people who were of age on November 3, of 2017, and she had already sent in her request to the state. 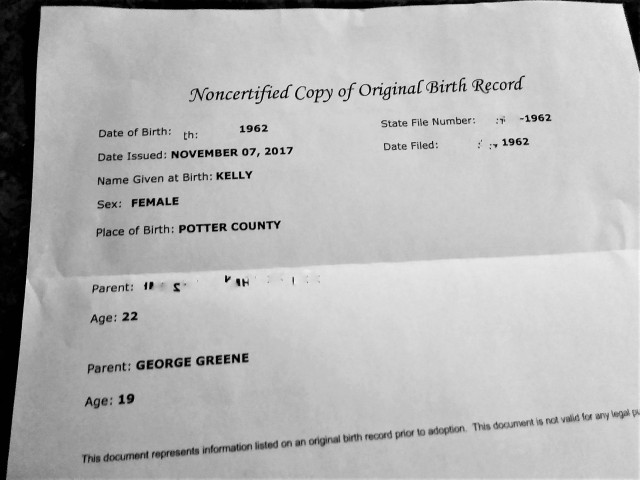 Kelly was at last able to see her birth certificate which helped solve the mystery.

The above birth certificate proved that her mother was who we thought. The father was a bit of a surprise as the man was neither of the mother’s two husbands. However, Kelly had already through DNA testing had found the Green family and now the birth certificate confirmed the father. Kelly was able to find her biological family due to hard work on her part and DNA testing. Also what helped was years of family research that helped to make sense of the information on the birth certificate and gave direction to the DNA findings.

This summer my wife and I traveled to Potter County and met and visited with Kelly and Susan. We had a wonderful time and will be going again next year. It is a satisfying and pleasant feeling to meet family and to form bonds that you would never have without the research and effort that had to be done just to discover your family’s story. Just to be on the sideline to see the joy that Kelly and her family have experienced is very satisfying. It has also given me even more of a reason to keep researching and writing the family’s story.

Left to right. Susan Moore Lewis, myself Charles Moore, and Kelly Hunter. Picture is taken at the entrance to the driveway to the long abandon farm where Susan grew up and where Kelly’s mother stayed when she was pregnant with Kelly. At long last Susan was to learn what happen to the little baby that was born in 1962.

It has not all turned out well. Kelly’s biological mother who is alive has refused to acknowledge her or even speak with her. Also, her brothers and sisters from her mother’s two marriages have not been willing to accept her. This is the reason many names and locations have been left out of this blog. However, her siblings from the Green family have embraced her and welcomed her to their family. Regrettably, her biological father has died. His children do not believe he ever knew of Kelly’s existence. I tend to agree due to the clandestine nature of her birth. Of which some facts had to be left out so living people could not be readily identified. This month one of Kelly’s newly found siblings drove over 600 miles to visit with her. They spent several days visiting and she was caught up in her Green family history. But even better she has found new family members to love and be loved by.

Kelly with her newly found Brother, Christopher Green, who came to visit this month.