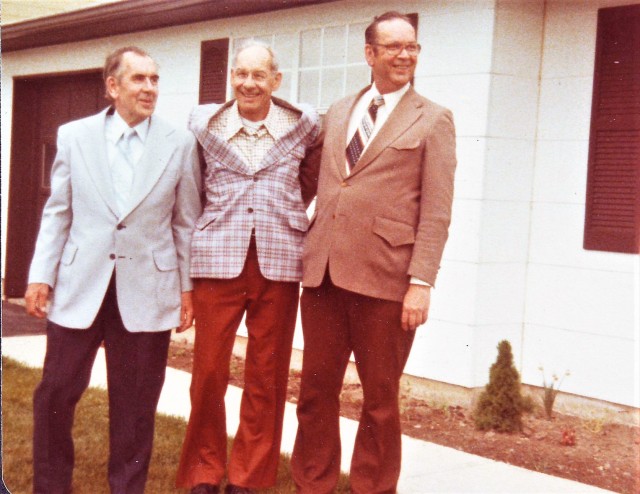 This is another of what I call a front porch picture. It is of three brothers Edward Lyon, Charles Lyon, and Robert Lyon. Edward and Charles were my wife’s uncles while Robert was her father. Edward was born in 1916, and Charles in 1912, while Robert was born in 1924, making him the baby of the family. Their father died in 1939, after a lengthy illness. While this was going on the Great Depression was in full vigor and had taken a toll on the Lyon household. The result of their father’s illness and the lack of income was the two older brothers had to leave school and forfeited their education. One had to quit in high school, and the other never made that far. They took jobs where they could find them. They clerked in stores, general labor or working in a fiber plant; this brought in money so their mother could maintain home and family. The one thing they made sure of was that their younger brother stayed in school and graduated high school. This is something Robert would remember for the rest of his life. Robert was to become an attorney after serving in World War 2. While his brother Charles did not have any children, Robert paid the college expenses for Edward’s oldest child.

The three brothers were to remain close for the rest of their lives. They lived during the age of the bi-plane to seeing a man land on the moon. All went through World War 2, with one earning a purple heart. One brother sent a son to Vietnam, and none of them relaxed until he returned. Families raised, employment was obtained and lost, visits and vacations were shared. Weddings and baptisms, and good times were enjoyed. As in all families, times of sorrows made their visits. They buried their Mother Alice in 1961 and closed ranks when a family tragedy struck. Finally, they had to bury each other and their wives. Edward’s wife was the first to die in December 1980. Robert was at this time battling cancer and in the middle of his treatments. He was in no condition to travel the three hundred miles for the funeral. I remember the tears he shed that he “could not be there for his brother.” Robert was next to die in January 1982, just 13 months after the death of Bea, Edward’s wife. I was in the hospital room with Robert in what would be the last weeks of his life when Edward came to visit. Robert and Edward greeted each other warmly, and then Robert asked: “where is Bea?” Just for a second a stunned look came over Ed’s face, but he recovered quickly saying “she could not make it.” Charles died next in 1988 then his wife Eunice in 1998. Edward was the last brother with his death in 2002. Doris, Robert’s wife, was to die in 2006.

“Our brothers and sisters are there with us from the dawn of our personal stories to the inevitable dusk.” – Susan Scarf Merrell

From left to right: Charles Lyon, Robert Lyon, Edward Lyon. Photograph taken in the early 1930s. Photograph from the collection of Charles Moore.

I will share with you one amusing family story that I was to learn. Charles and Edward were to live near to each other in the Nyack, N.Y. area for all their lives. Robert would move well up into the northern corner of New York. It seems that Charles’s and Edward’s wife’s got into a little dispute. The relationship between the two ladies was to get so frosty that the husbands were not to speak with each other as to do so would greatly upset their wives. So Ed and Charles took to meeting each other in a local bar. The best part was that neither man drank and was what we would call teetotalers. In fact, both men were quite religious, and a bar would be the last place one would look for them. That was the idea. Their wives and friends would never think to look for them there and the chances they would run into someone they knew was small. This went on for a while until the two wives worked things out and all was made right. However, their secret meetings are still only known by a very few people.

Like Loading...
This entry was posted in Whats in a Picture? and tagged Family history, genealogy, Lyon, Nyack N.Y.. Bookmark the permalink.