The above picture is what I call a front porch picture. You know what I mean where everyone gathers on the porch for a group picture. Many times a porch is not even needed. While looking at the photographs in my collection, I have noticed many of these pictures. I have come to the decision that I will feature these from time to time on my blog. We can learn so much about the people in these pictures, and we should take note of them in our own family’s history. The people all shown above are relatives of my wife’s. They are left to right Joyce Monty Smith, her aunt, Emma Craft Monty her great-grandmother, Etta Monty Smith, a great-aunt, Doris Monty Lyon, her mother, and finally Oreon Monty, her great grandfather. The sad fact is that we tend to lose our ancestor’s stories that are three or even just two generations old. Here is how you can learn a little about your ancestors and perhaps recapture some of their stories.

Oreon Monty was born in the year 1850 and died 1930. The year Oreon was born California becomes a state, and New Mexico and Utah are now territories. The Fugitive Slave Act is passed making it illegal to shelter runaway slaves even if they reach a free state. The new law forces under penalty of law the return of these slaves. 1850 saw the first women’s rights convention in Worcester, Massachusetts. Flogging is abolished as a punishment in the U.S. Navy. Also “The Scarlet Letter” by Nathanial Hawthorne is published.

Etta Monty Smith was born in the year 1857 and died in 1942. In 1857 Kansas ratifies an anti-slavery constitution. The Supreme Court handed down the Dred Scott Decision which stated in short that under the U.S. Constitution, Scott was his master’s property and was not a citizen of the United States. The Court also declared that the Missouri Compromise, which prohibited slavery in certain areas, unconstitutionally deprived people of their slaves. The Mountain Meadows Massacre takes place in which 120 pioneers are murdered. The National Association of Baseball Players is founded. New York City saw Elisha Otis, install its first elevator. 1857 saw the first issue of the Atlantic Monthly Magazine.

Emma Craft Monty was born in 1866 and died in 1938. In 1866 the National Labor Union was formed, which is the first national association of unions. The Atlantic Telegraph Cable is completed. The Plains Indians score a major victory when Capt. Fetterman and 80 Soldiers are killed. The Jesse James Gang robs a bank in Lexington, Missouri. Tennessee is the first Confederate State to be readmitted to the Union. Also in 1866 Lucy Hobbs Taylor, is the first woman to earn a Doctor of Dental Surgery degree.

Joyce Monty Smith was born in 1919 and died in 2006. The year she was born saw the signing of the Versailles Treaty (drawn up at the end of World War One) and the creation of the League of Nations. However, due to the politics of the day, the U.S. Senate rejected the treaty and adopted an isolationist view in our dealing with the world. We also passed the 18th amendment which prohibited the sale of alcohol. Also in the year of her birth race riots broke out in 26 major U.S. Cities including Washington D.C… The dial telephone was introduced to the public by American Telephone and Telegraph Company. Albert Einstein’s theory of general relativity is confirmed. Johannes Stark from Germany (discoverer of the Doppler Effect) wins the Nobel Prize in Physics. Cincinnati won the World Series over the Chicago White Sox’s. This resulted in the Black Sox scandal in which eight White Sox players were banned from baseball for life, for intentionally losing games. 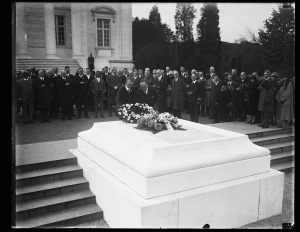 Doris Monty Lyon was born in 1921 and died in 2006, the same year as her sister Joyce. In 1921 Arlington National Cemetery Tomb of the Unknown Soldier had its first burial. Governor Miller of New York told members of the N.Y. League of Women Voters in a speech “that the league had no excuse for existence.” The speech was not warmly received by the women. Albert Einstein is awarded the Nobel Prize in Physics. “The Age of Innocence” by Edith Wharton, wins the Pulitzer Prize for fiction. Rudolph Valentino is becoming known as the movies best-known lover. James Joyce’s “Ulysses” is published in Paris. 500 copies which were sent to the U.S. were seized by the U.S. Post Office and burned as obscene material. The N.Y. Giants win the 1921 World Series, defeating the N.Y. Yankees.

The picture was taken in the year 1927. Here are some of the events that took place in 1927. The Columbia Broadcasting System (CBS) goes on the air. Saudi Arabia becomes independent of Great Britain. The last Model T Ford is produced. The pilot Charles Lindberg crosses the Atlantic in the first non-stop flight in his plane “The Spirit of St. Louis.” Golfers in S.C. are arrested for violating the Sabbath. The U.S. Supreme Court permits forced sterilizations of various unfits by states where such surgeries are practiced for eugenic reasons. Perhaps the worst school mass murder was committed in 1927. In Bath, Michigan 45 people are killed of which 38 are elementary school children. Also, over 50 more people are injured. The “Jazz Singer” was the first movie to synchronize sound and picture. A Roman Catholic priest Father George Lemaitre was the first to espouse The Big Bang Theory. Babe Ruth hits a record 60 home runs in a single season. His N.Y. Yankees also win the 1927 World Series. The must-read book of the year was “Elmer Gantry” by Sinclair Lewis.

While we have learned very little personal facts about these people, we have in fact learned much about them. By knowing and having some understanding of the events that took place in their lives you gain some understanding about these people. These events could not help but have an influence on their beliefs, opinions, and how they lived their lives. All the events of each generation have an effect on the people living through them. This is passed down to each new generation which is mixed in with their new experiences until finally, it is our turn. I guess the best way to say it is that my great-grandfather on my father’s side (who I never met) has through the years echoed down to me his life experiences. My wife’s Mother Doris Monty Lyon was to have a child (my wife’s brother) with Downs Syndrome. Now read once again the events of 1927 and imagine how Doris was affected. So take out those old front porch pictures and see what you can learn.

Like Loading...
This entry was posted in Whats in a Picture? and tagged Family history, Family Photographs, genealogy, Gonya, Lyon, Monty. Bookmark the permalink.

44 Responses to A Front Porch Picture