Going To the Movies 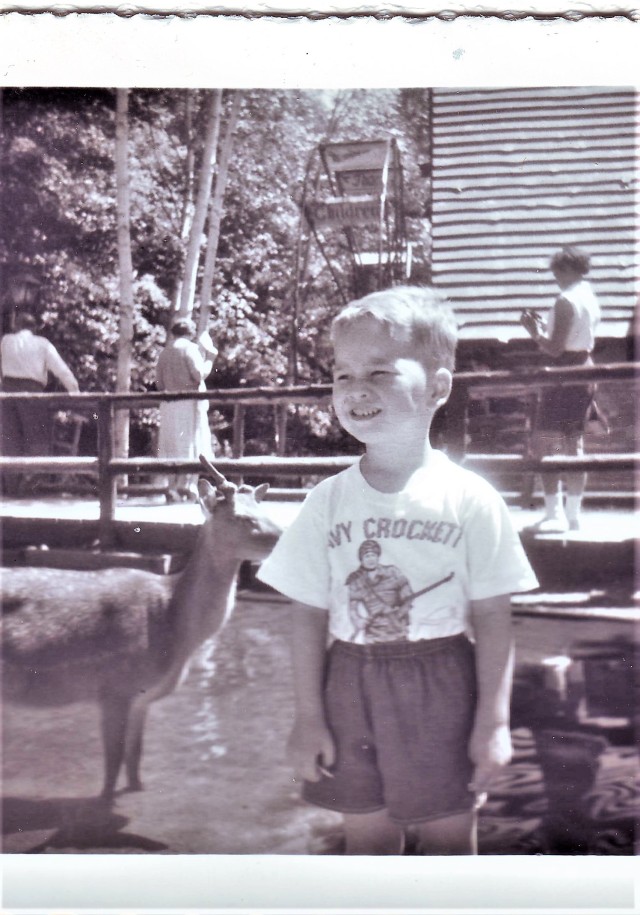 This is me in my Davey Crockett shirt. While not really released as a movie I was a big fan

A few days ago I was watching on television the original King Kong movie. I remembered as a child when I first watched this movie and feeling very sorry for King Kong. This caused me to reflect on my lifelong affection for movies. I also started to think about how these movies played a part in the narrative of my family’s story. Movies seem to weave in and out of some of my fondest memories.

Westerns were and still are a favorite movie to watch.
Picture from Flickr, The Commons. Contributing Library, The Library of Congress, from the book The Story of Montana year 1916.

I grew up going to the movies at the Strand Theater. The Strand was a fixture in downtown Plattsburgh, N.Y., and still is even today. My mother, Veronica Deloria, worked there for a short while selling tickets and worked the concession stand. She often told the story of how they stopped the movie and announced the bombing of Pearl Harbor. All military personnel had to report to the local base right away. Soon everyone was listening to the radio trying to get the latest news on what would be for us the start of World War Two. My early story at the Strand was very different. I was about six or seven when my mother brought me to see the Walt Disney movie Old Yeller. If you have not seen the movie, you may want to skip the next few lines. It was a great movie about a boy and his dog. I can clearly remember how thrilling the movie was and that I was on the edge of my seat for much of the movie. However, the ending was gut-wrenching when the dog came down with rabies after fighting off a rabid animal saving once again the family. The young boy had to put down Old Yeller. At that moment I stood up and let out the longest and loudest booooo that I could muster. My poor mother grasped my arm and tried to calm me down. That’s when I wailed “but mom they shot the dog.” I have never to this day fully trusted a Walt Disney movie. However, I was hooked on the movies and the many worlds to which they would transport me. My wife and I who I meet in high school went on countless movie dates to the Strand. Over the years times grew hard on the single screen, downtown movie theaters. Many towns have lost these gems. However due to the efforts of far-sighted people, a very small town was able to save and restore this special and wonderful place. Their website is; http://www.strandcenter.org/ and well worth the look. They were very helpful and sent me the pictures below to use with this blog. 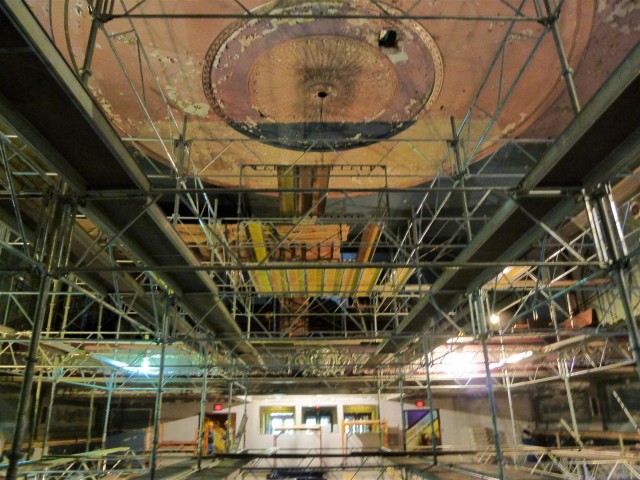 Theater restoration, inside the Strand Theater, Plattsburgh, N.Y.. Picture courtesy of the Strand Center for the Arts.

The restored Strand Theater. I remember that is was never a good idea when I was young and attending an afternoon matinee to sit in the rows just in front of the end of the balcony. One never knew if you would be the target of flying missiles of candy. I played it safe and sat underneath the balcony.
All pictures of the Strand Theater courtesy of the The Strand Center for the Arts. Plattsburgh, New York.

The newly renovated Strand Theater in Plattsburg, N.Y.. For many years many of my dreams would start with this curtain being drawn back and my dream starting on the movie screen. Picture courtesy of the Strand Center for the Arts, Plattsburgh, New York.

Also, we had several drive-in movie establishments located in our area. Plattsburgh did a large business in the tourist trade bringing down visitors from north of the border. On most weekends during the summer you could see their cars filling up the spaces at all of our local drive-ins. When I was about 16, my Aunt Verna treated me to a movie at the drive-in. The movie was The Dirty Dozen, and as many of you know, it was an action packed movie. I enjoyed the movie, and today I own a DVD so I can watch it whenever I want. However, I cannot watch the movie or catch a glimpse of it on television without thinking of my aunt. After we had come home from the movie when my aunt thought I was somewhere else in the house, I overheard her talking to my mom in a hushed voice. She was horrified at all the profanities in the movie and could not believe they were allowed to do that in a movie. To tell the truth, I had not even noticed. Also, I am sure now looking back, that the movie had many other parts that would have made my aunt uncomfortable. It always brings a smile when I think about it.

My wife Sandra Lyon Moore also has fond memories of movies and television shows. Her father would come home from work and relax by watching TV. He had installed a very high-end antenna on top of the house that could draw in stations from Canada. While many of the shows were in French and his understanding was very limited it did not stop him from enjoying all types of science fiction and off beat movies. I think one of the reasons we got along was the fact we both liked Star Trek. He also enjoyed cartoons such as The Flintstones and Huckleberry Hound and was on a first-name basis with Bugs Bunny and his whole gang. How they could make him laugh. 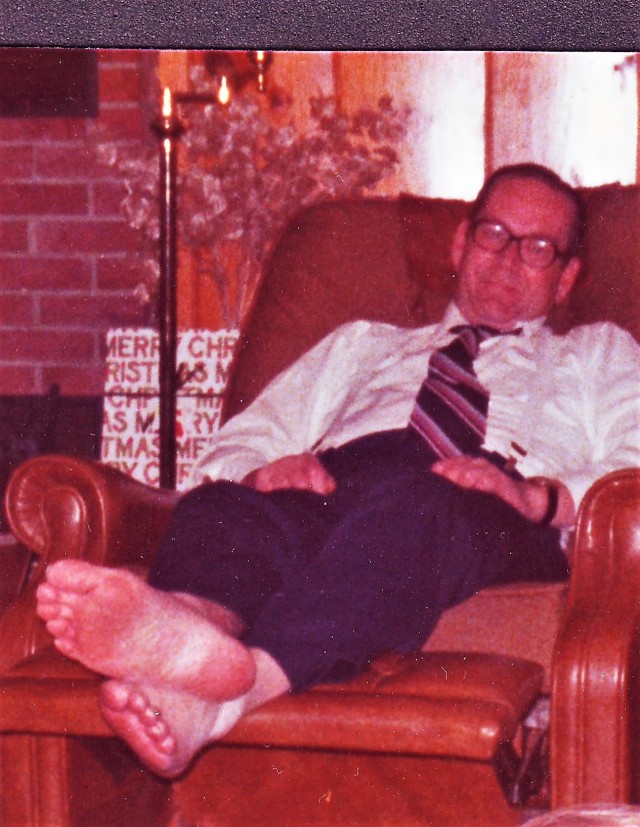 My Father-Law Robert Lyon in his easy chair after a day of hard work. The shoes and socks are off and soon he would be in a tee shirt and a bib overalls. My wife Sandy recalls all the strange movies he would watch from this chair.

In my own little family, we made good use of the new must have VCR to bring countless movies home to the family. It was for us a good way of watching and enjoy movies as a family. While most of the movies we watched are long forgotten to this day my adult children recall the huge “popcorn bowl” that the five of us shared while watching the movies. I was myself a manager at a movie multi-screen complex for a couple of years. The family including the grandchildren enjoyed the perks of free movies which they enjoyed to the fullest. However, I discovered my own movie watching went way down during this period as you were way too busy working to watch the movies and the last place you wanted to go on your time off was back to the workplace to try and catch a movie. So a much smaller popcorn bowl was often used at home while I watched my movies on a DVD.

Do you have stories about movies, television, plays, involving your family? Perhaps you should tell the stories, so they will be remembered and become part of your greater family legacy. One day an elderly woman who was a regular customer came into the movie theater I was working. She carried with her a large scrapbook which she wanted to show me. In the scrapbook she kept many of the tickets to movies, baseball games, Broadway shows, and other events she had attended throughout her life. She had started when her father many years ago brought her to her first show. While most of us will not be able to draw upon such a precious resource even one or two stories are better than none.

57 Responses to Going To the Movies