A Drowning in the Saranac River 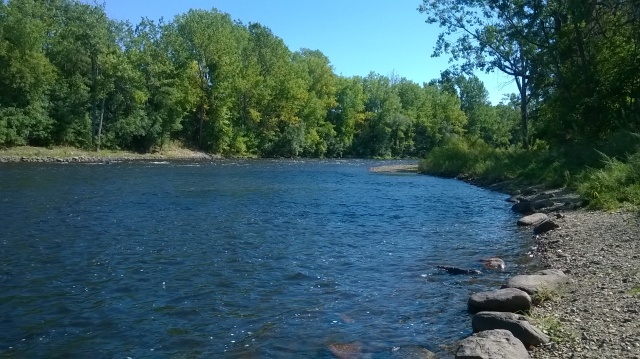 The weather in Plattsburgh, N.Y. had been pleasant for several days in April 1964. Herbert Frederick age 76 decided to take advantage of the weather and do some yard work. It was a pleasant 55 degrees as he was raking the lawn and waved to a neighbor that was driving by at five p.m. This was the last known time anyone would see Herbert alive. The lawn ended in a 15-foot drop into the Saranac River that weaves through the city of Plattsburgh. All that was found was the rake and Herbert’s glasses on the thin lip of land at the river’s edge. Fifty-two years later this tragedy would help break down one of my genealogy brick walls and introduce me to people in my family tree that I had no idea of their existence

However, I will have to go back eighty-one more years from 1964 to the birth of my Grandfather, Willis Deloria. He was born to Joseph and Marceline Deloria. The question that I never could find a satisfactory answer to is who was Marceline before she married Joseph and took the last name of Deloria. I can recall my mother telling me that she was an Indian and as a result I was 12% Indian. There may be some truth to this as my DNA test shows 2% Native American ethnicity. Years of research later has given me no information to confirm this and in fact, my Native American ethnicity may have come through my maternal grandmother’s line. But that is still not a proven fact. Marceline’s maiden name was said to be Shadrick or Shredrick depending if you are looking at my grandfather’s marriage or his death certificate. Other facts about Marceline that were either not clear or unknown were dates of birth, death or marriage. Most records say she was born in Canada, but none show where in Canada. I have found Marceline in only two U.S. census the 1880 and 1900. They have vastly different birth years and different countries of birth. I decided to go for a tie-breaker and ordered my grandfather’s U.S. Social Security application. I felt confident that this would give me the information I needed. I waited six months to get the copy in the mail. After I looked it over I was even more in the dark and if possible even more confused. It gave Marceline maiden name as Frederick.

My grandfather’s Social Security Application. I have no idea why his mother’s maiden name is listed as Frederick.

I started to review the records I had on my grandfather. That is when the names of the witnesses for his marriage came into sharper focus. They were Herbert Frederick and Lenora Gerow Frederick. Here was the name Frederick, and Lenora was my mother’s middle name. I had to find out more about these people. This was when I discovered about Herbert’s drowning in the old newspaper articles that can be found online through newspaper archive sites. I read how his son Armand called the police and then went into the fast moving river that was at least four feet deep and very muddy. He lost his footing several times and had to come back to shore. Soon hundreds were involved in the search and still Herbert was not found after a full days search.

Here Herbert Frederick is listed as a witness to the marriage of my grandparents.

Herbert’s grandsons stationed themselves on a bridge down river to keep an all night vigil on the second night that Herbert was missing. At 5:15 a.m. they spotted the body. The search was over. I also learned who Herbert’s parents were, and this was the break in my brick wall. In Herbert’s obituary, I noted his mother’s maiden name was Nancy Shedrick. The name Shedrick was very close to the maiden name I was given for my Grandfather’s Willis Deloria, mother Marceline.

Where Herbert’s grandsons kept their all night watch.

I was able to find an obituary for Nancy dated May 24, 1928. Listed in the surviving relatives were a half brother Willis Deloria and a half sister Mary Bushey, my grandfather and great aunt. Once more in my genealogy research I have found close relatives that I never knew of their existence. I was also to discover that Nancy had another sister Martha. I sent away for Nancy’s death certificate to see what additional information I could gather. With the death certificate  I learned that Marceline was married to a Joseph Shedrick and had two daughters Nancy and Martha before she married my Great Grandfather Joseph Deloria and had two more children my Grandfather Willis and Great Aunt Mary. I also learned her maiden name was Obin not Shadrick, Shedrick, or Frederick. I was able to find other records that show that Marceline and her little family came to the United States from Canada in 1878. Nancy was to Wed John Frederick, who became a city police officer in Plattsburgh, N.Y. The online newspaper archives are full of stories of his exploits. They had three sons of which one was Herbert, who witnessed his Uncle Willis’s wedding. 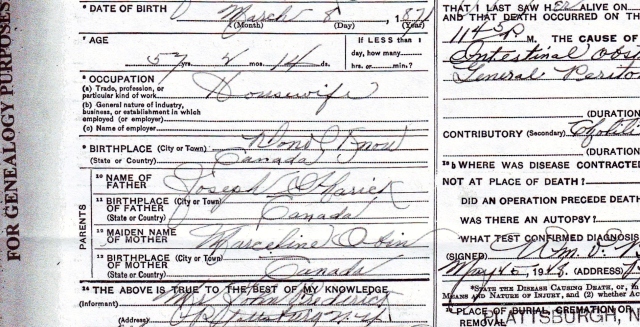 I was able to find two descendants of Nancy, and they confirmed many facts for me. They also told family stories of Nancy and her police officer husband that had me laughing out loud. They were to try to send me some pictures but almost two months have passed, and nothing has arrived yet. I do hope that I hear from them. I have opened a new door in my genealogy search. By opening this door, I now see many more doors that have yet to be opened and new hidden family history waiting to be discovered.

Here I am with my Grandfather Willis Deloria.

Joseph Shedrick and Marceline Obin had the following children:

Joseph Deloria and Marceline Obin had the following children:

39 Responses to A Drowning in the Saranac River