I had nothing but smiles this day.

In his book “Descendants of Thomas Dakin of Concord, Massachusetts” A.H. Dakin has my 2nd great grandfather Abraham Morton Dakin death date as January, 1914. The book was printed in 1948 and I thought that more up to date information had to be available. However, I was wrong. No exact date of death, no cause of death, or even where he died. This lack of information was like a pebble in my genealogy shoe that was very irritating. In my search for this information, I was to learn much about the man, and he has become one of my favorite ancestors. He had a strong partner in his wife Elizabeth Moral Warner, with a marriage lasting 63 years until her death in 1909. Abraham was to enlist in the Union Army in 1863 at the age of 43. At that time, he was farming and Elizabeth was pregnant. In fact, four out five of his brothers who moved to Maine fought in the Civil War. All were to survive the war. Abraham’s children all were to receive an education. However, this is not a story of his life, but an attempt to show what we must do to get the information we need. For the advanced genealogist, I am sure my suggestions will sound all too familiar. However, you may be able to give some pointers in the comments. One of the first steps I did was to find Abraham in the censuses. I found him in all the censuses from 1850 up to 1910. I even found him in the 1890 Veterans Schedules taken of the surviving Civil War Veterans. This provided me with two big clues. The first was that he had served in the Civil War and that he moved to Pennsylvania. In fact, I was to find that Abraham was to move often. From what I am able to gather he moved to Pennsylvania from Maine. Then he moved to New York, back to Pennsylvania, and was to move from one side of the state to the other. When Abraham and Elizabeth reached an age where they could no longer work they were to stay with their children’s family. However, it was John his last born child who was to provide a place for his parents to stay. Now that I knew where he was living I researched all the cemeteries that were online near where he lived. I would recheck this often as new information was added and more cemeteries would go online. I also contacted local libraries and historical societies. In all the places that I asked them for help, every one of them tried their best to get the information I needed. To give you an idea of how many places I worked, let me give you some numbers. Abraham had seven children who lived to adulthood. Also, he had 21 (yes 21, this is not a typo) brothers and sisters. I researched where they lived in case he was buried there. Newspapers were another source I would use. With more and more of them going online, they hold an ocean of information. I also subscribed to few pay sites that contain many newspapers just waiting to be explored. While I found many interesting nuggets of information about my ancestors, I found no new information about Abraham. However, while viewing a county web page, I was able to find much information on Elizabeth. She died while they were living with their son in Yates County, New York. I had not seen any of this information about her before, so I believe I was breaking new ground. I was able to find her small obituary in the newspaper. Also, she was listed in the Register of Deaths Town of Milo, Yates County. Someone had transcribed her maiden name to Washer from Warner.. When I visited I was able to view the records and I am sure it is Warner. However, I could find no record of Abraham. 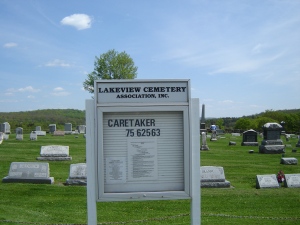 A well cared for cemetery. This is Abraham Morton Dakin’s finial resting place.

A very useful tool and the one that gave me my breakthrough is Find a Grave. Every few months I would cast a wide net and look for him on this site. This year I found Abram Y Dakin. It showed a gravestone with the date of death being 1913. The middle initial was wrong and the date of death was off by one year. I was able to contact the cemetery association which provided me with more information. The person buried was Abram Dakin. They had no middle name and showed the burial date as 1913. The owner of the lot was a John Dakin. In fact, Abraham was occupying just one of eight sites. They other seven are not being used. At this point, I was almost sure that I had the right person. I could not yet explain the Y for the middle initial. The picture on Find A Grave did not show enough detail. So I then contacted the library which also houses the historical society. They were able to find a very short death notice in the Montrose Democrat dated September 3, 1914. It gave the date of death as August 28th. Here at last was my 1914 death date. The next thing I had to do is wait about a month until Ancestery.com put up its file of death certificates for Pennsylvania between 1906 to 1924. My understanding that they will be adding more dates in the future. When I was able to view the certificate of death, I knew I had found my 2nd great grandfather. I then was able to make the trip down to his grave and pay my respects. Also, I was able to explain away the Y for his initials. The picture below will explain the misunderstanding.

If you look closely you can see the middle initial is a M and not a Y. Also the year of death is wrong. It should be 1914.

Abraham Dakin’s Death Certificate. This was the proof I needed.

Finding out about my 2nd great grandparents was a journey that took me to many places. The best part was while I was not getting the information I wanted about them, I discovered much about my Dakin family. I was on the hunt for many years. The one thing I can tell you is if you have a so called “brick wall” keep trying. New information is going online every day. The day you give up could be the day the clue you need is posted, just waiting for you to find it. Also keep checking your facts. It would have been very easy to see the Y and just skip over it. Also, I could have kept the date of death as 1913, but by searching for all the facts I got the right date of death. Who would think that the gravestone and the cemetery records could be so wrong? That is why you keep looking and checking what you find.

Here I am getting the picture.

33 Responses to Hiding In Plain Sight